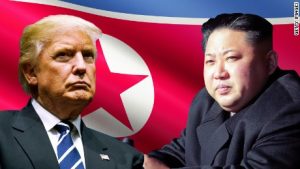 If you’re paying attention to international news at all lately, you’re probably well aware of the growing conflict between the United States and North Korea – specifically their intercontinental ballistic missile program which rumors toward the possibility of implementing nuclear materials. Through all the discussions, however, you also may have heard of the word “sanctions,” and you may or may not necessarily be aware of what that word means or implies for the world stage.

Merriam-Webster lists quite a few meanings for the word. However, in terms of international relations, the term “sanction” means the following:

Basically, it means a bunch of countries gang up on one or two other countries using political, economic or military pressure to try to convince them to stop doing bad stuff – kind of like what’s happening with the North Korea situation right now.

Particularly used these days are economic sanctions, which imposes restrictions on international commerce between the target country and whichever countries are involved with the sanctions in the first place. As an example, the United States has imposed (or encouraged through other entities such as China or the United Nations) economic sanctions on North Korea in an effort to dissuade them from continuing testing within their missile and nuclear programs. Some of the particulars involving these sanctions include:

The general concern for the country in question is usually one of economic consequence that forces the country to reconsider the course of action they are taking for the sake of avoiding a collapse of their economy. In the case of North Korea, however, the economy doesn’t seem to suffer too badly at the moment – at least, not to the point of discouraging such behavior or effort put into these programs. As Justin Hastings writes, North Korea appears to have adapted to the economic pressure in a number of surprising ways.

Other types of sanctions besides those resorting to economic sanctions include diplomatic and military sanctions, which essentially are what they sound like. Diplomatic sanctions generally impose a lack of communication between world leaders or the governments in general through canceled visits by high-ranking officials or the expulsion of diplomatic staffing. Military sanctions, while possibly inclusive of actual military action, differentiate themselves from wars through tactical, precise military strikes to disable a country’s military capabilities rather than destabilize the nation as a whole and prime it for occupation or liberation, whichever the case may be. More often than not, however, military sanctions themselves are less cumbersome than actual military courses of action. They tend toward resolutions similar to that of economic sanctions in that they impose restrictions on arms and weapons to the country in question.

The whole purpose in general for effective sanctions is to come to a relatively peaceful resolution to issues that rule the international stage, even if by attempts that seem akin to intimidation tactics such as threatening one’s economy or military capabilities, or by establishing less-than-ideal relations with other countries. While this may be considered similar to a tactic such as “muscling the pot” in a one-sided poker game, it is generally seen as a favorable alternative to military action where countless lives could potentially be lost as a result, and it better exemplifies unity of opinion and policy on the world stage.